Obviously I wanted to see the election night live. I’m getting a degree in American Studies since find this country and its culture deeply fascinating. When I told my friends and the BLUG team, the response was usually the same. “Why watch it live? Clinton will win anyways!” Some people actually laughed when I suggested Trump could win this election. In any case, I wanted to see the outcome for myself. The “Fachgruppe Englisch” organized an election night event. So I’m going there.

The crowd is pro-Clinton, as expected. So am I for that matter. If there are people here hoping for a Trump victory they keep quiet about it. Most of the spectators study at the English Department. I know them from my classes and they all expect to see the first female president of the USA at the end of the night. When asked why they want Clinton to win I basically always get the same answers: “Trump is not fit to be President!”, “He is sexist, homophobic, anti Muslim, anti Mexican!”, ” He is stupid, a liar, a sexual predator!”. Mix these options as you like to get the picture. Clinton on the other hand is a career politician, but Trump is no alternative. She will win and continue the agenda of the last presidency! The first female president of the United States! At this hour nobody believes in the alternative.

Before the main event, the return of the results, the “Fachgruppe” organized talks. For example about the so called “electoral college”, the basis of the democratic process in the US. A complicated system that, for the most non-americans, only becomes relevant every four years (follow the link to an excellent video explaining the electoral college).

12 am CNN broadcasts the first results. The first counties fall to Donald Trump, but nobody is worried. Counties don’t matter yet  and the projections show Clinton has a safe lead. 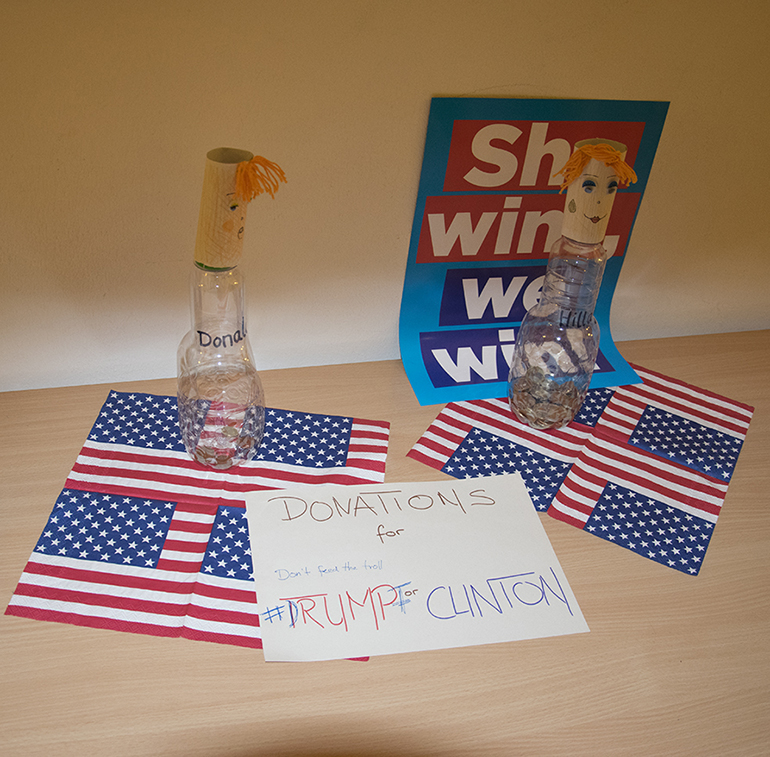 2 am Clinton takes the lead in Florida. At this point Trump is leading in the electoral votes. Nobody is worried. Even if Florida stays red. Clinton will defeat Trump by winning the states that are traditionally voting democratic. As soon as the western states are counted Trumps small lead will disappear! I meet Anne Marie Besset. She is with democrats abroad. We talk about the night and she is ecstatic about the turnout at this event. Will Trump win? “That would be a disaster!”- she says. But she doesn’t believe it. She brought signs for everyone: “Love Trumps Hate”. Now it’s really like a democratic rally we usually only see on the news! The mood is great! 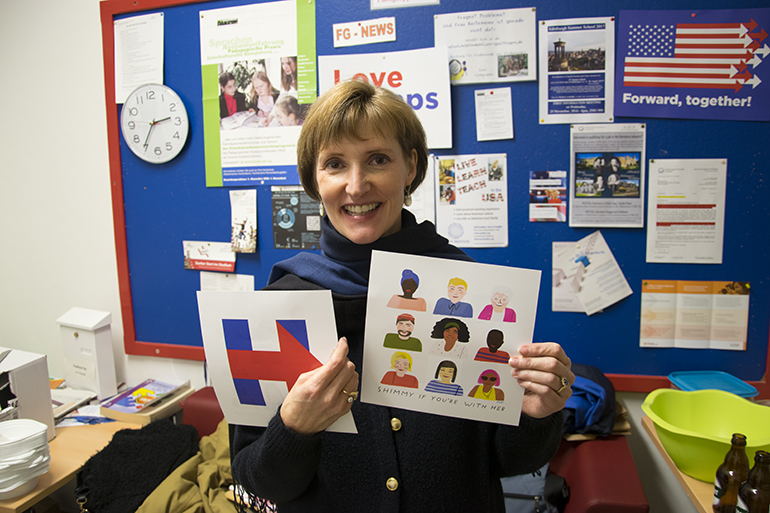 3 am Why is Trump still leading? Why is the race so very close in a lot of the states? Oh right! The important counties aren’t counted yet. The whole race will surely change soon. It has to. The US would never elect Trump, right? Right?

4 am The people are tired. Some of them have been sitting here for 8 hours or longer. Some go home. Trump still leads with 149 to 109 electoral votes. Some dare to ask; can this really be happening? The next results come in. Trump leads now with 167 electoral votes. Frustration sets in. Some are lighting up cigarettes in chains. I’m with them.

5 am Clinton takes California and, for the first time tonight, takes the lead! Finally! Something goes according to plan! It is a welcomed spark of energy for everyone still here. But half an hour later Trump takes Florida and breaks the 200 vote barrier. It starts to sink in. Clinton does not have the votes. The undecided states are still supporting Trump. He is leading very comfortably. Can this really be happening? Resignation. Depression. Denial. It can still happen for Clinton! Even the CNN reporters seem surprised. They worked from a perspective where the Trump was the one having to prove something. Now they have switched. Clinton is in trouble. Bargaining. They still look for ways out of this but it becomes clear it won’t happen.

6:30 am We have to leave. The rooms will have to be cleaned up for the classes. Trump will win. As we pick up our things and our hanging jaws from the floor I look around the room. “Love Trumps Hate” and “I’m with her” banners lie all over the place. They seem cynical now. Exhaustion is replaced by a shock that won’t subside for a while. “What a disappointment”, says Anne Marie. For most of us the understatement of the year. She looks as defeated as we all feel. 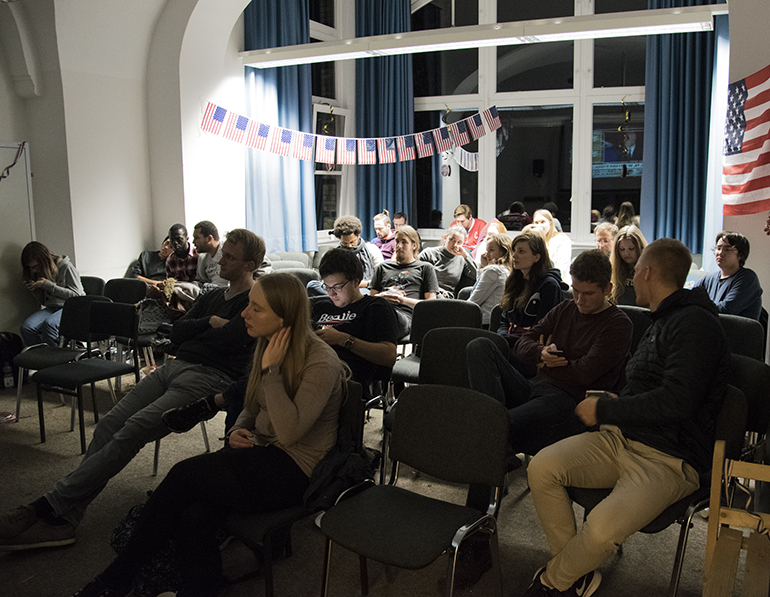 I go to sleep. When I wake up Donald J. Trump is officially the president elect. On Twitter, Facebook, Instagram and my WhatsApp people vent their disbelief and shock. Back on Campus I can easily spot the people who stayed up to see it. They seem like in trance only sometimes they snapping out of it, when they try to make sense of what happened. The questions come. Blame is thrown around. Was it the FBI’s fault? Did the Email scandal finally break Clinton? Are the polls just not reliable anymore? What is going to happen next? I didn’t want this to happen. But the reality is that we now live in a world where a shocking number of people elected Donald Trump to be their President. The problem is that many didn’t want to believe. Believe that the frustration among US voters was high enough to elect him. Being right was never this dissatisfying.