One Erasmus semester abroad: The best time of your life, six month you’ll never forget, adventures waiting for you behind every corner, making friends from all over the world, partying all night long and doing some studying in between. Sounds awesome, right? It is mid-September, I’m sitting on the floor of a hostel dorm in Dublin’s city centre and look around. Well, that really seems to work out perfectly.

How did I end up here? 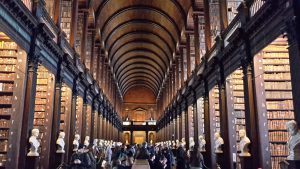 It all started with a simple but fateful idea I had at the end of last year: “Erasmus- that might be a fun thing to do…” And before I really knew what was happening, I was accepted to spend the upcoming winter semester at Trinity College Dublin studying German literature. That’s how easy it can be. And now, after a fight against the disciples of the red tape overlord and at least three nervous breakdowns due to the lack of money and accommodation, I am here – alone.

Freshman reloaded
I’m nibbling at an apple. One of my roommates is sleeping in his bunk bed, creating with his soft snoring noises the soundtrack of my evening. I’m tired, too. Rather than experiencing an Erasmus euphoria, I’m exhausted. Last week’s Freshers’ Week threw back repeatedly to my worst experiences as a freshman in Göttingen. With that I don’t mean the times of drunk dancing in public, but those times of feeling lonely, the pressure to make new friends on the spot and the general state of being confused to a maximum. No, I’m not homesick (sorry Mum), it is rather the feeling of starting anew that I’m not used to anymore. But that will pass. Hopefully sooner than later. 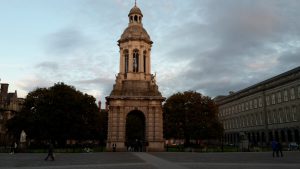 Only a dream?
Leap in time: It is October by now. I’m sitting on my comfortable bed in my comfortable room and look around. Not bad actually. The dorm is now only a part of my nightmares, I have met a lot of very interesting people and the grind of college life has tightened its grip around me. Although the dark clouds stick persistently to the Irish sky (but honestly, what would this country be without them?), they disappeared from my mind. No, to be honest, my first week in Dublin was not the Erasmus world of wonders I had hoped for. And even if the bad memories fade away a little more each day, it was a reminder that great expectations can just as easily turn into their negative. Starting over in a new city can be hard – for a freshman as well as an experienced student. Fortunately, I have overcome the first obstacles and most of the semester is lying ahead of me. So why not just make it the best time of my life?