Here at BLUG, we’re always focused on telling exciting stories, giving practical tips and sharing interesting background information about the University of Göttingen. In this article the focus is on one person: Judith is 26 years old and almost finished with her master’s degree in maths and German. She sparked my interest because she is posting about a special topic on Instagram: Multiple sclerosis.

Coping multiple sclerosis is the name of Judiths Insta-Account which counts almost 1,800 subscribers. “I didn’t really expect it to be so big after all,” Judith tells me. “When I was diagnosed with MS at the end of 2017, I actually created this second profile so that people who follow me on my private account wouldn’t be annoyed by the topic of MS. And if someone wants to know something but I don’t want to talk about it they can just have a look at my Insta profile!” Judith also exchanges information and experience with other MS diagnosed people on the platform: “Göttingen has an MS support group, but its members are much older than me”, she explains. “But networking with people my age is important for me. So I’m doing most of it online.”

The body attacks itself

With her public profile, Judith is also interested in providing information about everyday life with MS. “MS is an autoimmune disease, your body attacks itself”, she explains. “It’s an inflammation of the central nervous system.” If you think of the nerve tracts as an insulated cable, Judith says, MS can easily be understood: If the insulation on such a cable is damaged, it no longer functions properly. Exactly that happens to the nerve tracts in the body; some of the stimuli no longer get through properly because the insulating outer layer of the nerves is attacked by the inflammation. “That’s why I sometimes stumble because I can’t control my leg, or my cell phone falls down because I can’t really feel my fingers in that moment.”

MS – the sickness of a thousand faces

How people react when they learn that Judith has MS is very different: “Often people feel sorry at first and don’t really know what to do with this information”, says Judith. “Some people have prejudices, such as that I cannot have children or will soon end up in a wheelchair.” This is mainly because many people simply don’t know exactly what MS is, Judith explains. “But I don’t blame anyone, after all, I don’t know all chronic illnesses myself.” Judith has also dedicated an entire “story highlight” on Instagram to the prejudices that people with MS are constantly confronted with. MS is also a medical mystery – science doesn’t know exactly why this disease exists. “It is not certain at all that I will end up in a wheelchair”, Judith tells me. “After all, medicine continues to make progress and MS is different for each and every person who is affected. That’s why it’s also called the disease of a thousand faces.”

You wouldn’t notice the chronic illness on Judith when you meet her – but this doesn’t mean that it does not affect her in her everyday life and especially in her studies. “I am a rather ambitious person”, Judith reveals. “It’s important for me to always give my best and achieve the best possible grades.” But that’s not so easy with MS. “Sometimes my body just needs rest”, she says, “for example, I get eye pain if I look at a screen for too long, or my leg goes numb. These symptoms flare up especially when I have lot of stress.” Judith explains that it is sometimes difficult for her to accept that in such a phase she can’t work six hours on her assignment paper but maybe only one. “It means I need more time for everything and that is depressing me sometimes”. Especially during times like these Judith says it its important to get support: “At the PSB, the psychosocial counseling center, you always find a good first point of contact.”

When she was diagnosed with MS, Judith contacted the university to find out what options and support were available for her (more information can be found here). “I went to the barrier-free studying counselling service and got advice from the contact person for students with chronic illnesses”, she says, “and I learned that I can claim compensation for disadvantages. That means, for example, more time for an exam, an additional lamp on the table, that kind of thing.” If in the middle of an exam her hand starts to shake or her eye hurts because of the inflamed optic nerve, that’s quite helpful, she says. “It only involves a lot of bureaucracy”, Judith describes the application process. “And it doesn’t help me at all when it comes to compulsory attendance, for example. There are simply no good solutions for that yet.”

The problem of compulsory attendance

In general, the compulsory attendance for students in Göttingen has long been an issue. While there is no such thing at the Social Science Faculty, the situation is different for many other faculties. For example at the Faculty of Philosophy, where Judith is studying German. There you are only allowed to be absent twice per seminar, for each additional absence an extra task must be handed in. “For the most part, I think that’s okay”, Judith says, “and I also think it’s really important to attend seminars regularly. But a student should also take responsibility for their own studies so that they can decide for themselves whether or not to go to a session. If you miss too often and don’t rework the material, you will simply get a worse grade in the exam.” Not being required to attend would have helped Judith insofar that she wouldn’t have had to go to every lecturer to explain that she had MS and would therefore perhaps miss more than two sessions. Besides, having to hand in an additional assignment costs a lot of time, says Judith. “You have to rework the material anyway and then maybe write an essay – that’s considerably more than the 90 minutes of seminar you missed”.

Online-seminars as an alternative?

At the moment, no one can really be there anyway because of the Corona pandemic – many seminars have therefore taken place digitally. Judith was attending two online-seminars during the last semester: “Online seminars were helpful because I didn’t have to leave the house when I wasn’t feeling well. But I was still able to attend the class even though I kept in the background”, Judith says. As an alternative to physical presence she likes the digital participation in courses – the question is whether this possibility will continue to exist after the Corona pandemic.

Impaired students always have to explain themselves

During the last campus elections, Judith campaigned for the abolition of compulory attandance and for a more inclusive university. She also points out that with the current system, students with a chronic illness or a disability have to explain themselves over and over again. “Not everyone is comfortable telling a complete stranger that they are ill. It’s actually a very personal matter”, Judith says. For her, being open about her illness is not a problem, as you can guess from her Instagram. On the platform she shares her feelings when she’s doing good, but also when things aren’t going as well as she’d like them to. “Also, I’m very interested in things like nutrition, new medical knowledge and so on”, she says, “and I share that on Instagram as well.” The response is always good, Judith reveals, even when it comes to more personal things. “For example, if I share that I didn’t have a good day, other people write encouraging messages, or vice versa. If something goes well, others share my happiness and then tell me about their experiences.” 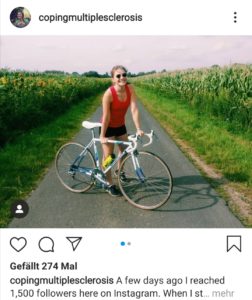 What is striking about Judith’s account is that she is super sporty. She is very fond of cycling; she has owned a racing bike for some time now and takes long rides with it regularly. “That may sound a bit clichéd”, she warns, “but since my diagnosis, I try not to think ‘I have to do sports’, but ‘I can do sports’. After all, it’s not certain what my situation will be in ten years. And it’s also important for people with MS to keep moving so that the body has internalized the movement patterns.” Judith also combines the sport she does with fundraising: “I wanted to raise money for an organization that does research in the field of multiple sclerosis and that uses the money only for research and not for other things,” she explains. Judith has found such an organisation. She has set herself sporting goals for “Kiss goodbye to MS”. When she makes progress, you can reward Judith with a donation to the organization.

Plans for the future

When I met Judith to talk about her Instagram account, she had just started writing her master thesis, which is almost finished by now. But she has decided not to become a teacher, which is what a Master of Education prepares you for: “I really wanted to be a teacher”, she says, “but that’s not a good job if you have MS. You can’t just slow down when you need to, there are schedules and everything.” The decision to alter her plan was not easy for her, Judith admits. But she has come up with an alternative quickly: First, she wants to spend some time in Limerick, Ireland. She has received a scholarship that will enable her to teach German at the local university. After that, she might want to do a doctorate: “I’m primarily interested in the field of simple language”, she reveals. “There’s not so much research yet, so that would definitely be something I’d be interested in. I’m also thinking I might specialize in the topic of diversity and equal opportunities in education.” MS has changed her life quite a bit, Judith says. She has to learn to re-evaluate and accept many things, which is often not so easy for her because of her ambition. “The most important thing really is to ask for help when you need it”, she says. “And if anyobody wants to talk about MS, they can always send me a message on instagram!”

If you want to learn more about Judith, you can either visit her Instagram account or her blog – or just have a look at her fundraising page!